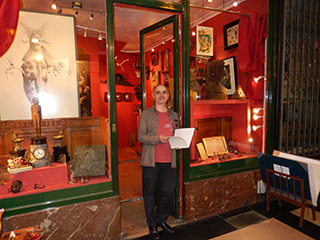 Cabinet des Curieux Gallery presents the work of eight young Japanese women artists who are depecting with originality, sensuality and humor the recent social mutation of the archipelago.

In the country of the Rising Sun, today men are imprisoned in the social model of the salarymen. In the contrary, Lolitas are taking time to make themselves, and, recently have started to write a new page of Japanese women history.

As a new driving force of the economy, these women are now working for the modernization of the traditional Japanese culture. This culture was built on unknown principles to the Western World. The impermanence (Buddhist concept) is mixed with the attraction of darkness and internalization of feelings.

By modernization, these young artists claim their individuality and want to generalize the notion of Ego, a notion which is banned by Buddhism and Shintoïsm, principals religions in Japan. These artists form their desirs and fears in their work by mixing dreams and obscurity.

They give us a wonderful catharsis of their fantasized lives, full of colored pop and poison.